Mary Jo has had a lifetime involvement with the Brittany and field trials. She acquired her first Brittany while in college in the 1960s.  After college, she moved to Arizona, acquired several more Brittanys and became a charter member of the Sahuaro Brittany Club.  Upon returning to Illinois, she became involved in the Illinois Brittany Club, immediately became an officer and began working to save field trials at Crab Orchard Refuge.? ?When efforts were unsuccessful, she lobbied for new grounds at Rend Lake.
During the early 1970s. Mary Jo worked to form the Illinois Brittany Championship Association to promote the running of hour stakes under The American Field and still serves today as treasurer of both the Illinois Brittany Club and the Illinois Championship Association. She served the national club as National Field Trial Secretary, Hospitality Chair and helped co-ordinate events during the National Championships at Rend Lake during the 1980s.  From the late 1990s to present day, she has served as Executive Secretary of the American Brittany Club and is the ABC's Legislative Liaison to the AKC & US Sportsmen's Alliance?.
Mary Jo has written articles for the ABC Magazine, The American Field, Show Site and other outdoor papers about the Brittany Breed, the sport of field trialing, and legislation and she has been heavily involved in legislation on both the state and national levels.  She worked with legislators and other field trialers to promote acquisition of grounds first at Rend Lake in Illinois and Pyramid State Park when the US Fish and Wildlife began ending trials on grounds supported by federal Pittman-Robertson Funds.  As an ambassador to sporting dog events and hunting groups, she represented Field Trial Clubs of Illinois at every Conservation Congress in Illinois and currently serves as a Director of that organization as well as Illinois Federation for Outdoor Resources, the Illinois Federation of Dog Clubs and Owners, and the Crab Orchard Kennel Club and the Friends of Pyramid doing legislative work for each of those groups. Her work and close association with the Conservation Department and groups has helped to develop habitat for game birds.
Mary Jo’s dogs have been trained or campaigned by pro trainers Lee, Jim & Chad Holman, Jack Brooks, Al Gorrow? and Tom Tracy?.  She has supported and worked closely with husband Ray to insure their dogs compete in Amateur as well as Open stakes.  One of her dogs, ?R-U Nat AAA FC Allair's Evereddy, sired two National Champions, Franklin County Bandit and Minnehaha's Tammy.  Several others have been Runner-Up in National Amateur or Open All Age Championships and have been named in many classics and hour stakes. Her line of dogs has produced two hall of fame dogs, Ajax VII and Lane’s End Bowtie Annie.?
Mary Jo’s dedication to our sport has been recognized by several organizations.  She has been honored as a Lifetime Achievement Award Winner for Performance Events by the American Kennel Club, recipient of the Illinois Conservation Foundation as a Hall of Fame Member of the Foundation's Outdoor Recreation Award, Field Trial Clubs of Illinois Honor Roll and the Illinois Federation of Outdoor Resources Hall of Fame.  These awards have come because of her work for nigh on 50 years representing the Sport of Field Trialing and promoting Conservation and Recreation. We often forget that without those people who work on our behalf, we would not being able to run our dogs, hunt, and find places to do the things we love. 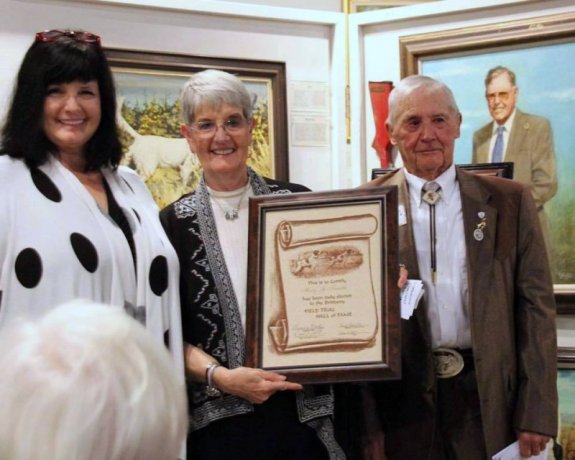 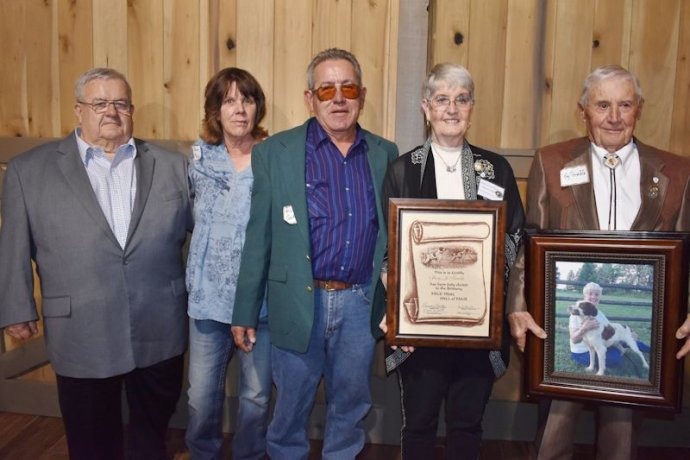