Ron (Doc) Harling has been an avid proponent of the Brittany breed for over 40 years, having purchased his first Brittany in 1961 from Ernie and Nora Facer’s Highbrow Kennels. He subsequently became involved in Brittany breeding, training, sportsmanship, hunting and competitions, competing at the national level for over 20 years. He has since held every position at the regional level, been a long standing member of the American Brittany Club Health Aspects and Genetic Defects committee and is a member of the American Brittany Club Dog Hall of Fame committee.

Doc has given back to the sport for years, having judged Brittany’s at every level. Hunt tests, regional trials and Championships for both Brittany’s and most other upland breeds are on his resume.

Probably his most rewarding accomplishment has been his stewardship of the American Brittany. On any given Sunday, you will find Doc and other Brittany enthusiasts training at his house. He has spent a lifetime nurturing new sportsmen into the sport, assisting with new pups and old dogs alike. Fall will inevitably find him afield, often with novices or young hunters. He has ensured that newcomers to the field trial scene felt welcome, loaning horses and offering assistance when needed.

Doc has served in every position for the Brittany Club of Upper New York. Without his steadfast support, this club would have inevitably folded many years ago.

Doc unselfishly contributed his time to field trialing on both the national and regional levels and has attended and participated in every National Open All Age Championship for over 20 years. He mentored and welcomed many people into the Brittany world, bred some of the finest dogs throughout the country, and in general, has advanced the American Brittany. 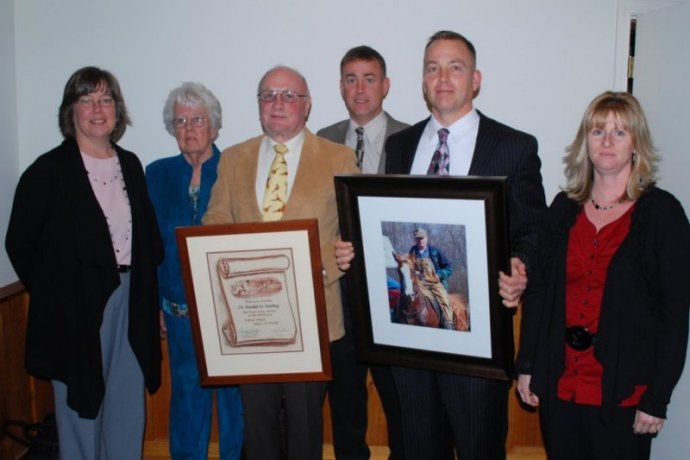